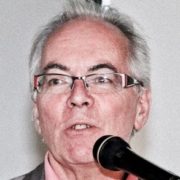 John Best is a town planner and urbanist, formerly CEO of MK Council, and now finding ways to put MK firmly on the cultural map as chair of Arts Gateway MK. He also chairs MK Lit Fest and the Community Arts Resources Centre, both within the wider AGMK family. He lives in New Bradwell, is involved in several waterways projects including as Trustee of the Bedford & MK Waterway Trust, chair of MK Canalside Forum and former SE chair of the Canal & River Trust. He is an occasional bass guitarist.